I’ve had the pleasure of knowing Dirk Walker for years now. He’s an amazing artist based here in Birmingham and also the owner of Loretta Goodwin Gallery.   If you have never been in his gallery, you must go soon!

Dirk is known for his “Birmingham Landmark Series.”  He says the works evolved “completely by accident.”  He had been doing mostly pastoral and landscapes scenes, but then one day he attempted an urban setting with some “non-descriptive figures.”

As he puts it, “There was such an immediate appeal that I felt I had found something that allowed me to pursue a more individual style.  The flowing paint and abstract qualities also loosened me up in my brushwork.  Having grown up in Birmingham, I have [seen] so many changes to the city and landscape, so the ‘landmark buildings’  had sentimental meaning not only to myself but to my clients.”

The foundation for his artwork began with a more traditional approach called chiaroscuro, which deals with light and shadow, that he learned through the teachings of David Leffel, a Contemporary Master who taught at the Art Students League in New York City.

Today, Dirk Walker describes his approach as “Impressionistic with a slant towards Abstraction.”  He works primarily in oils for the “wet-into-wet” look and for their luminosity.

Below is a painting that he was commissioned to do for a client of mine. 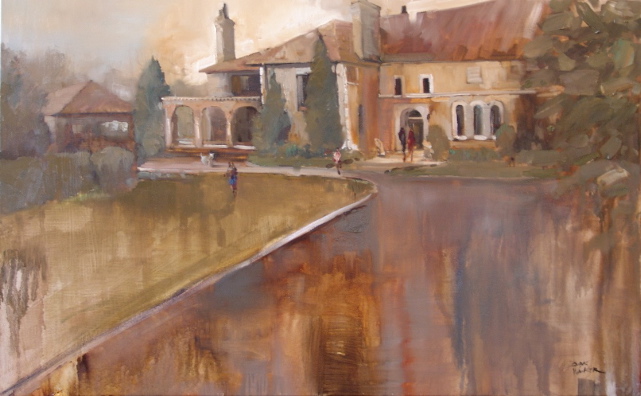 He chose this perspective — with the driveway leading the viewer into the painting — because we wanted the piece be more “painterly” rather than architectural.  Dirk found this angle focused more on the figures in the painting rather than the structure of the house, while still leaving room for the abstract feel he leans toward.   Dirk achieves this effect by using many thin washes in the beginning stages of the painting, claiming that it sometimes creates “fun mistakes” that he leaves in the work.

This piece is an interpretation of my client’s home that they can pass down through the generations.  The palette of soft golds and blues and the watery, abstract feel is absolutely beautiful.  Isn’t it dreamy?